"JUSTICE FOR ALL?"
THE PLIGHT OF DOMESTIC WORKERS IN JORDAN 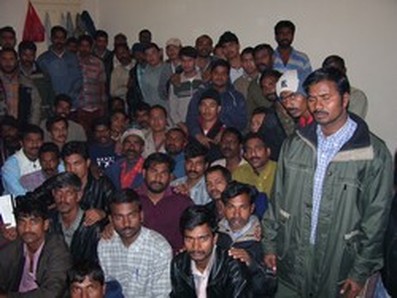 AMMAN, 28 March 2006 (IRIN) - Joseph (not his real name), an Indian national, holds his hands up, trying to calm the crowd of Indian and Nepalese workers, all eager to tell their story.

"Before coming here, we each paid about US $3,000 to an Indian agent,” Joseph explains. “When we got here, we thought everything was okay."

Joseph is one of some 40 men now stuck in decrepid conditions and illegally trafficked into Jordan by Indian recruiting agents in return for large sums of money. One worker recounted how he had to sell his house, while others said they were forced to borrow heavily to pay the agent. The per capita income in India is US $3,400, and in Nepal it is $1,500.

They are currently housed in poor conditions by the Jordanian counterpart recruitment agent in the capital, Amman, awaiting promised employment opportunities.

The men were part of a larger group of 118 migrant workers who had been living without running water, proper food, sanitation or heat for weeks. The other 78, however, managed to return home by borrowing money to pay another agent.

All of them originally came to Jordan in a group of 280 Indian and Nepalese men seven months ago, recruited to work as truck drivers for two Jordanian transport companies. Due to a subsequent dispute, however, their contracts were cancelled.

Now, the new Jordanian agent is refusing to send them home unless they can pay their travel expenses and fines for their expired visas. He is also withholding their travel documents. The migrant workers, therefore, find themselves stuck in Amman, living in poor conditions, with no income and unable to pay outstanding fines. According to Joseph, their respective embassies have told the men that they are unable to help pay for their repatriation.

Jordan’s Minister of Labour Bassem Salem said that the government is currently in negotiations with the Indian embassy to resolve the issue. As for the Nepalese workers, some said they had paid the new agent some $3,000 to go home, but had not heard back from him.

Prakash Suveid, chief of mission at the Nepalese embassy in Riyadh, said Kathmandu was trying to find the agents and make them pay for the workers' return home.

After being told they could not be recruited by the Jordanian companies that originally called for them, Joseph and his group of workers have lived in harsh conditions for almost two months. When they first arrived
in Amman, the workers were immediately sent to the southern port city of Aqaba where they stayed for four months awaiting work permits.

Joseph says that, on good days, they each receive two pieces of bread from the recruiting agent in Amman. They also rely upon the goodwill of the local Indian community and a nearby Catholic church, which has donated food, money and supplies.

“I'm ashamed that, as Jordanians, we’re treating them like animals," said Dr Barbara Burgan, a doctor who donated food and medicine through a local church group.

A drop in the ocean

This group is only a drop in the ocean, however, compared to the wider problem of migrants’ exploitation
in the kingdom. According to 2005 statistics, there are 400,000 documented foreign workers in Jordan, mostly from Arab countries. There are another 4,878 from India.

Numbers for undocumented workers, experts say, are harder to come by, but some sources put the figure at about 150,000. Most of these – from Egypt, Bangladesh, India, Sri Lanka, and Pakistan – work in so-called "unskilled sectors", like construction and agriculture.

Ray Jureidini, a professor at the American University in Cairo and an expert on migrant workers, says
there are no accurate statistics on human trafficking in the region because of the difficulty in obtaining data.

As for the "black market" in labour, Jureidini said that human trafficking had become a booming business,
and that workers from poor countries were often vulnerable to unscrupulous recruiting agencies. However, because of their lack of official documentation, most migrant workers remained at the mercy of their employers, working long hours for little pay and few rights, Jureidini added.

Jordan has become a "transition country" for human trafficking, especially into Iraq, the professor noted.

"All stakeholders in Jordan estimate that illegal figures are double the official one," said International Office
of Migration (IOM) chief of mission in Jordan, Fernando Arocena.

When contacted, the recruiting agent said he had provided the workers with adequate food
and accommodation, but claimed the workers were hiding food and damaging water tanks.

Despite sending written complaints to the Indian and Nepalese embassies, workers say their diplomatic representatives have been slow to act. Some argue that, with poverty-stricken countries increasingly reliant upon foreign remittances for income, governments become nervous about talk of curbing markets for migrant labour.

According to a 2005 report by the International Labour Organisation, India is currently the largest recipient
of workers' remittances, at some US $15.2 billion per year.

Suzana Paklar, country representative for the International Catholic Migration Commission, says that “Government response to reports of worker exploitation will always be balanced by the humanitarian
and economic realities of the issue.”

Firas Ta'amneh, a Jordanian lawyer working on migrant issues, points out that governments are seldom interested in protecting migrant workers' rights if the move will have a negative impact on foreign remittances.

Meanwhile, for the workers still stranded in Amman, hope for a just solution is running out. "Day by day,
the problem gets worse," Joseph said. “We’re suffering here.”