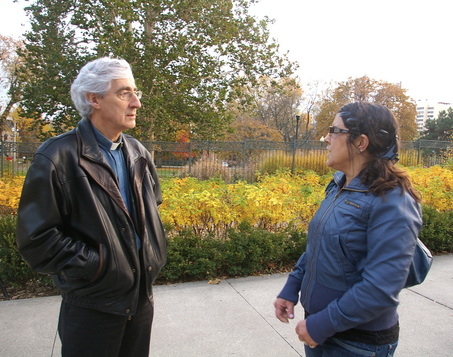 But here in “the track,” an area in downtown Toronto known for crime and prostitution, is where Toronto archdiocesan Deacon Robert Kinghorn has been ministering to people once a week for the past six years.

He lends a sympathetic ear and offers prayers for the women and men, many of whom are wrestling with broken childhoods and drug addictions, who seek his counsel.

In Ontario, the Supreme Court is considering an appeal by a group of former sex trade workers
to decriminalize prostitution.

Yet Tracey Ferguson, a survivor of these streets, says ministries like Kinghorn's do more to promote the human dignity of street workers than any legislation ever could because of the human face he brings to his ministry of compassion.

“Him showing people that he cares even though he doesn't know them,” Ferguson added, “it's stuff like that that gives people a little bit of hope.”

“If more people took heed to what he's doing and started doing that, I think you would start to see a bigger change,” she said.

On a cool autumn evening, Kinghorn begins his downtown ministry as night falls on Jarvis Street.
Amid the hustle and bustle of night life near a local hamburger joint which has earned the reputation of being a hangout for women working in prostitution, Kinghorn immediately stands out as he sports a white Roman collar.

But here on these streets, Kinghorn, a 26-year deacon with a background in prison ministry, seems at ease.

Kinghorn explains that the heart of the ministry is about accepting others and “listening to the hurts that have happened in people's lives and to let them know that if we can accept them, God can.”

“Jesus had talked about, when two or three are gathered, He’s right in the midst of them,” he said.

So how did this all begin?

King horn recalls being downtown one evening six years ago and sensing a great need for the Church’s presence there.

“We have to be a light in the darkness,” he said.

Roman Catholic deacons usually hold a full-time job (Kinghorn is a computer consultant) since their church ministry is volunteer, not paid, work.

Kinghorn's weekly walkabouts start after work (and errands) at around 9 p.m. They end at midnight or 1 a.m.

Except for one street known for drug deals, Kinghorn said downtown streets aren't as dangerous as people think.

Kinghorn’s quiet, compassionate approach and dedication to his grassroots street ministry has earned him “street cred.” So far, he hasn't encountered any violence or close calls.

There was, however, the time when a drug dealer told Kinghorn he needed something from him.
“Yes?” Kinghorn replied.

“Can you say a prayer for me?” the man asked.

“Sure, what would you like to pray for?” was Kinghorn's response.

Then, out of the corner of his eye, Kinghorn noticed three other dealers making their way
towards them.

They asked what was going on and he told them. They also requested the same thing.

Kinghorn breathed a sigh of relief.

It’s moments like these, moments of God’s grace, that have served as a testimony to the fruits of this street ministry.

During this evening's walkabout, Kinghorn is joined by Ferguson.
She was a veteran of these streets and has successfully left the cycle of addiction and abuse.

“She made it to the Dean’s honour list each term,” Kinghorn beams.

And next summer, Ferguson, 49, will be the first in her family to graduate from college with a diploma in social work.
`
Ferguson has come a long way to get here.

Coming from a background of childhood and marital abuse as well as drug addiction, Ferguson worked in the sex trade for nearly 13 years.

She has been clean for the past five years and has a new job.
And there have been other successes: Ferguson has dealt with the ghosts of her past, reunited with her family and summoned the courage to forgive those who have hurt her while she was on these streets, including a man whom she considered a friend who raped her.

Ferguson credits God for helping her deal with her struggles.
And she thanks Kinghorn for “empowering” her and helping her reconnect with her faith.

“I always had a Bible in my back pocket,” Ferguson said of her time on the streets.

“Some people said, ‘Why are you carrying a Bible?'” she recalled.

“’You’re a hypocrite,’” was their charge.

“No, God knows I’m lost right now,” Ferguson answered, “and this is what is going to save me.”